by Katherine O. Rizzo (first published in the April 2020 Equiery)

For Jane Thery, the concept of stewardship was ingrained in her from an early age. Her stepmother’s family had large horse farms in the Shenandoah Valley and preserving their land was of great importance to them. “I was only 16 and was exposed to this family’s love of the land,” she said adding, “Horses and land go hand in glove so to speak!”

For the Love of Horses
Jane grew up in New England riding other people’s horses as she did not have any of her own. As a teenager she started riding with the Sleeping Giant Pony Club in Connecticut and while in high school, would drive to the barn in the mornings to muck out stalls and feed and then rode her lease horse Teddy in the afternoons. Jane tested up through the “C” level in Pony Club and then after high school, studied riding and teaching in England.

“I went to Porlock Vale Equestrian Center in Somerset, England, as a working student,” Jane said. She went on to earn a British Horse Society Assistant Instructor degree, which includes dressage, jumping and horse management. “I stayed on in Somerset and worked as a groom and exercise rider for a stag hunting stable [and] rode across the moors with the stag hunt,” she added.

Back in the United States, Jane continued to ride but did not have her own horse until later in life. “Returning to the Washington, DC, area, I rode in Virginia and then took a position at the University of Maryland and rode the campus horses,” Jane explained. “Then I found Reddemeade and joined their EquiShare program. I hacked out and took lessons and jump clinics.”

Jane met Catherine Clevenger and began riding her string of horses at Buck’s Haven Farm. “We did hunter paces, local events, foxhunting and trail riding,” she said. At that time, Jane took lessons from Elizabeth Madlener (a former Maryland Horse Council president) and Rumsey Keefe. “A friend suggested I look at a Thoroughbred mare for sale nearby. I found Pimienta, who was a hot, dark bay mare and former racehorse, polo pony and failed fox hunter.”

With the help of Rumsey and Matt Flynn, Jane brought Pimienta up through the Novice level in eventing. She competed locally in Maryland and Virginia and rode in clinics with stars such as David O’Connor, Denny Emerson, Bruce Davidson and Karen O’Connor.

In 2008, Pimienta was retired and now lives out her days at a farm in Virginia. Jane then purchased the Selle Français gelding Quattro au Lait, who was just four years old at the time. She began to focus more on dressage and is currently riding at Third Level. “He is at the beautiful Wyndham Oaks and doing Third Level dressage with help from Jaralyn Gibson as well as mini jumping and trail riding,” Jane stated.

Developmental Career
While Jane’s passion is for horses, farms and the environment, her career path took a slightly different route. Graduating from Duke University with a BA in International Relations, Jane earned an MA in International Economics from Yale University. Her first job was with the Ford Foundation in Lima, Peru, where she just could not get away from horses and leased a horse named Antares that she rode most weekends.

She joined the Organization of American States in 1995 and led the trade facilitation and private sector initiates of the Free Trade Area of the Americas negotiations. She also managed the economic portfolio of the Summits of the Americas Secretariat and managed outreach programs to the United States Congress. Jane recently retired from OAS with the highest professional rank of Principal Specialist.

Throughout this career, three things remained the same in Jane’s day-to-day life: horses, the environment and stewardship. “I wanted to volunteer as well and focus my attention on the environment since I have such a love of the outdoors,” Jane added. This led her to the Maryland Horse Council where she could combine these passions.

With skills learned through her “day job,” Jane founded MHC’s Farm Stewardship Committee in 2011. “Steuart Pittman was the [MHC] president at the time and said we needed a seat at the table for legislative issues related to farms,” she explained. Thus, this committee was formed to fill that seat.

Farm Stewardship
Through the past nine years, Jane has lead the Farm Stewardship Committee to create a voice specifically for horse farm owners and to promote good environmental farm stewardship practices. Through her efforts, the number of horse farms in the State’s Farm Stewardship Certification and Assessment Program increased from one farm to 32, recognizing over 3,000 acres of farmland that have a positive impact on the environment.

She has also bridged the gap between horse farm owners and environmentalists, bringing people together with the common goal of preserving healthy land. “Pastures are great water filters and carbon fixers,” she explained.

In addition, she has become a valuable resource for horse farm owners seeking to get in touch with experts to help their farms. “I’ve developed a network of people to whom to go to for various projects,” she said. “It’s been fun for me to bring these different cultures together.”

Beyond the Free State
As we move into 2020, Jane is taking the idea of networking to a new level, seeing a need for horse councils from nearby states to connect with each other. ‘We here in Maryland are way ahead on many concepts and we need to share this knowledge with others,” she said.

Most recently, Jane has been named to the Equine Land Conservation Resource Advisory Council. She joined the Council last fall bringing her years of conservation knowledge with her.

In 2019, Jane also launched her own business, Green Horse Enterprises, LLC. Through the business, she hopes to help in “greening” horse farms and equestrian venues, including exploring options for the new Maryland Five-Star venue at Fair Hill. 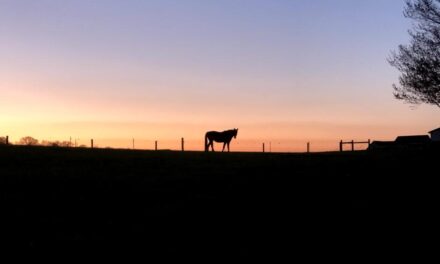 Horses and Preserving the Natural Environment