by Katherine O. Rizzo (first published in the September 2020 Equiery)

It was the late 1960s when a teenaged Bobby Lillis first stepped foot on a racetrack. “I remember watching those horses coming out of the paddock and seeing the beautiful colors of the jockeys’ silks and the majestic, shiney horses and my jaw dropped,” he reminisced. “I was just in awe.” That was at the then Hazel Park in Michigan, just a few years before Lillis started an impressively long career within the racing industry.

Race Riding
When Lillis was just 15 years old, he and his parents headed to Detroit Race Course to meet with some trainers and jockeys. “Someone said that Bob Holthus was looking for a hot walker so we met with him and next thing I know, I’m living in a tack room at the track,” Lillis said. At the time, Lillis already had dreams of riding but had never sat on a horse. Bobby Lillis’ first win as a jockey came aboard Kitty’s Special at Suffolk Downs in 1975.

“I learned to be a groom and then when I was 18 I went to Sugar Hill Farm in Ocala [Florida] to work for Sherman Armstrong,” he said. Armstrong was the leading jockey of two-year-olds ​​at the time and declared to Lillis that he would teach him to ride. “We were standing out there looking at a field of yearlings and he pointed at them and said, ‘I’m going to teach you to ride them,” Lillis remembered with a chuckle. “I kept telling him I’ve never ridden before and he just said, ‘you’ll fall off so many times you’ll learn to stay on.’ ”

Under Armstrong’s guidance, Lillis learned to start yearlings and eventually became an exercise rider for trainer Henry Shadowens. “I remember Sherman telling me not to rush into race riding and that I’d know when I was ready to ride in a race,” Lillis added.

By the fall of 1974, Lillis was sitting on a horse in the starting gate in his first race as a jockey. He was back at Hazel Park in a 6-furlong race and finished third. “What I remember most about that first race was how much my knees wanted to buckle when I was done. I was exhausted but loved it!”

The following year he broke his maiden on a horse named Kitty’s Special. That was March 9, 1975, at Suffolk Downs in Massachusetts. By this time, Lillis was living the life of the traveling jockey, wintering in Florida and traveling up the coast to Boston, stopping along the way at various tracks during various seasons. In 1976, he had a jockey’s license at 10 different tracks on the East Coast.

Maryland’s Appeal
In 1975, Lillis met his wife Ruthanne at Monmouth Park in New Jersey and in the spring of 1976 they decided to settle in Maryland. Why you might ask? Because between Pimlico, Timonium, Laurel Park and Bowie Race Course, Maryland offered year-round racing. “I knew here in Maryland I could just stay put,” he said. One of Bobby’s wins in Maryland came aboard Tim’s Hope at Timonium on August 12, 1977.

Lillis describes his career as a jockey as “average” but said, “I was able to put two kids through college. I also exercised [racehorses] in the mornings and was a parking attendant.” Being multi-talented and willing to work is what has kept Lillis in the industry for so long. When he had a bad fall that forced him to retire from race riding, “I had a chip in my hand and just couldn’t hold a galloping horse,” he had other options to pursue within the industry.

At the same time as his injury, the idea of casinos in Maryland was just getting started. “We thought this would destroy racing because at first, no slots revenue was going to racing,” he explained. So Lillis began writing weekly to local papers in opposition to the casinos. “I became a bit political by writing letters to the [Baltimore] Sun, BloodHorse and the Washington Post,” he said. “Then slots got tagged with racing incentives for purses and everything changed.”

It was Lillis’ passion for the sport he loved that impressed Richard Meyer, then President of the Maryland Horsemen’s Assistance Fund Board of Directors.

Backstretch Advocate
In August 1998, Meyer approached Lillis asking if he wanted to work for MHAF. “I thought I had hit the lottery!” Lillis said with a laugh. “It was a Monday through Friday job so I didn’t have to work weekends anymore!” However, it was working and advocating for backstretch workers that really drew Lillis to the job. “I lived and worked that lifestyle and have a soft spot for backstretch workers.”

Twenty-one years later, Lillis announced his retirement as MHAF’s Executive Director earlier this summer. However, he’s not ready for retirement! “I’m staying on ‘til the end of the year to help them transition to someone new,” he reported. “After 50 plus years of being in the industry, I couldn’t just walk away completely!” 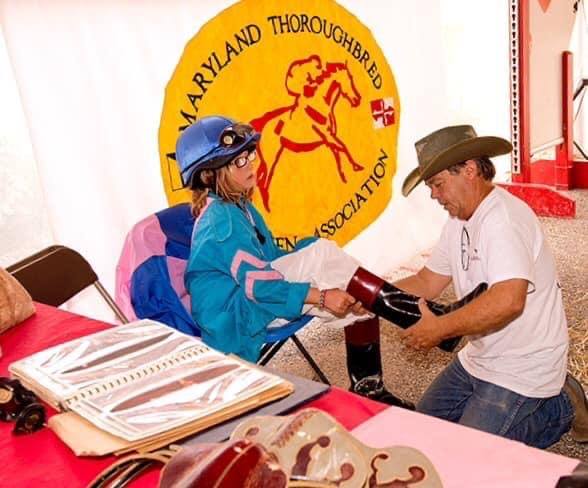 Bobby Lillis introduces a whole new generation to possible careers in the racing industry through a booth at the State Fair’s Horseland and stop on Pimlico’s Sunrise Tours.

During his time with MHAF, Lillis also took time out of his schedule to advocate for the sport as a whole, educating the general public through the Sunrise Tours during Preakness Week at Pimlico and in the Horseland tent at the Maryland State Fair.

“Fran Burns approached me one year to fill a spot when Donny Miller, Sr., had to pull out due to an injury,” Lillis said of his first Sunrise Tour experience. “She’s the one that suggested instead of being a tour guide, I have a station to talk about what it’s like to be a jockey.”

In true Lillis fashion, he went above and beyond with his tour stop. “I was able to get some extra silks, goggles and saddles and such to pass around to the kids and such,” he said. “The people who came [to Pimlico] got a chance to actually touch the equipment and see how light the saddles are and try on some goggles.” Burns loved it and Lillis has had a tour stop ever since. “After that first year, I started asking the jockeys to save me the goggles they weren’t using any longer and I would give those out to the kids who came on the tours.”

“The general public has a different perspective of what the industry really is like,” he added. “These tours are a good opportunity to change that perspective.”

At Horseland, Lillis took the Sunrise Tour stop idea to a whole new level by setting up a booth complete with an exerciser and silks and such kids could actually try on. “It’s a big hit with the kids and a great photo op for the parents!”

Honoring a Hero
Over the past 50 years, Lillis has given his all to the racing industry, with the majority of this effort benefitting Maryland’s backstretch workers and the overall image of the industry. Lillis has been recognized for his efforts over the years with a variety of awards. Bobby earned the 2019 Godolphin Thoroughbred Employee Industry Community Award for his dedication to the racing community.

Most recently, Lillis was awarded the Godolphin Thoroughbred Industry Community Award in 2019. That year he also earned a Touch of Class Award through the Maryland Horse Industry Board.

But it is not the awards that drive Lillis. It is sharing his own experiences and love of the sport. “I have to say, and people need to know, that horse racing here in Maryland has endless opportunities. So many countless opportunities to carve out a lifetime career.”

For your lifetime of service to the industry, we thank you!

“I’ve had the pleasure of working together with Bobby for close to 25 years now! We first met at the Maryland Jockey Club. Bobby always did such a wonderful job, and in particular, was great with the customers, who really liked him. His devotion and loyalty to Maryland racing was pretty clear to us all.

“I recall Bobby was constantly brainstorming all sorts of terrific ideas to draw new customers and engage existing fans. When the drive to bring slot machines to the racetrack was first initiated in the ‘90s, Bobby never missed a rally in Annapolis, and always encouraged industry colleagues to support our efforts. He even dressed up as a slot machine/grim reaper (I think he won!) for our popular employee Halloween costume contest.

“When Bobby transitioned to the Maryland Thoroughbred Horsemen’s Association and Maryland Horsemen’s Assistance Fund, he brought the same vigor, passion and commitment we valued so highly at MJC to his work on behalf of horsemen and the backstretch. Bobby is tireless in his advocacy for the backstretch and has spearheaded many programs of support that offer diverse services and opportunities.

“I know I speak on behalf of many in Maryland who feel as I do. And in 2019, that feeling was confirmed by his industry peers when Bobby received the prestigious 2019 Godolphin Thoroughbred Employee Industry Community Award. It remains a sincere honor to continue with him on the Fund’s team.”
– Karin De Francis, President of the Maryland Horsemen’s Assistance Fund Board