On March 20, Lieutenant Tim Robinson of the Wicomico County Sheriff’s Office told The Equiery that no charges have been filed yet against the owners of the over two dozen horses that were found dead on the 100-plus acre farm located outside of Hebron last Friday. “We don’t want to rush into anything and several veterinarians that specialize in horses have been called to the farm to examine the remains for cause of death,” he stated. The case is officially an open investigation.

Lt. Robinson went on to say that the priority of the Sheriff’s office at the time is to work with both the Wicomico County Animal Control and the Humane Society of Wicomico County to remove the horses from the property and begin the care they need. “A few have had to be euthanized due to extremely poor conditions and those have been taken for necropsies,” he added. The results of those have not been released as of press time.

As soon as the story hit the airwaves, televisions, and internet on March 16, rescue groups and individuals from all over Maryland, as well as near-by states, stepped in to help. Delmarvanow.com reported that the next morning, more than 5,000 lbs of grain had been delivered by a donation from Bryan & Brittingham, a farm supply store in Delmar, DE. Hay was also delivered by local dealers.

Investigators and animal control units quickly stepped in to remove as many horses as possible, and as of the morning of March 20, Lt. Robinson reported to The Equiery that only 30 horses remained on the property. There were over 100 horses on the property when authorities first arrived. “We’ve been delayed a little due to this snow storm but we hope to have the rest of them out of there by the weekend,” Lt. Robinson said.

Because this is an open investigation, county agencies are unable to release the names of the rescues and individuals housing the horses. Some groups have stepped forward on social media stating that they are caring for horses from this farm, however technically, it is the Humane Society of Wicomico County that has temporary ownership of the horses while the investigation runs its course. 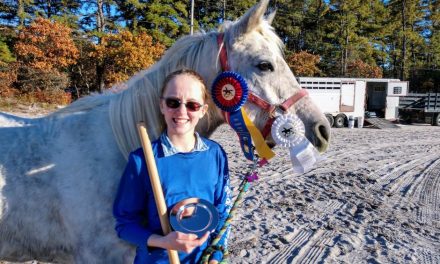