(first printed in the December 2012 issue of The Equiery) He has just always been there. Their rock. Their ship’s ballast. Their confidant. Their confessor.

Ask Sylvia Bogley Bigger or Fran “Junior” Magassy for their earliest memories of Leonard, and instead of an answer you will get a slightly perplexed look. It is the same look that you would have if you had asked someone to share her earliest memory of a parent. Earliest memory? Impossible. Like a mother or a father, Leonard has just always been there. They have never known life without him. For those who were new to Potomac, Leonard and his famed uncle, Johnny Jackson, were the key to being accepted into the Potomac social circle. “I knew,” explains Jt.-MFH Vicki Crawford, “that when I moved to Potomac in 1960, and I joined the hunt, if I wanted to make any friends I had to make sure that Johnny and Leonard liked me. I spent my first entire party getting to know them, not the guests! If they didn’t like you, you could  forget it. Little did I know, it was the beginning of a lifelong friendship.”

Who were Johnny Jackson and Leonard Proctor, these gatekeepers of society? They were the bartenders.

But Johnny and Leonard were not “just” bartenders; they were Potomac’s social arbiters. 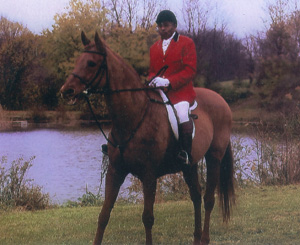 Leonard with his current horse Blue, who was bought for him by several members of the Potomac Hunt

As Washingtonians began to move out to Potomac, it opened up job opportunities closer to “The Home Place.” In 1945, Uncle Johnny Jackson got 15-year-old Leonard Proctor a job exercising horses, and in 1947 Leonard hunted for the first time. And that was that. He liked this work!

While they were settling Potomac and building farms, the local landowners likewise began forming the nucleus of the Potomac Hunt at the farm of General Semmes on Glen Road. Also at that time, a farmer’s pack of hounds was established at Charlie Carrico’s Bradley Farm (near the intersection of River Road and Bradley Boulevard). In 1945, the year Leonard learned how to ride, the Potomac Hunt came into its own, establishing a clubhouse and kennels on Glen Road in Travilah, eventually absorbing the remains of the old Washington Riding & Hunt Club.

Throughout the memoirs of these families can be found the members of Johnny and Leonard’s families. The lives of the Jackson family are woven through the lives of the founding families of the Potomac hunt…whenever a memoir is written, a Jackson is mentioned.

While Johnny worked primarily in those days for the Kay family (it is he who dubbed Fran “Junior” when she was just a tot), Leonard worked for a variety of families, including the Bogleys. When Sylvia started hunting as a little girl, Leonard was the one she remembers as always being there, making her feel safe. As the club grew, so did Leonard’s involvement. He moved out from under his uncle’s wing, and began riding horses—and making foxhunters—for other members. Jt. MFH Vicki Crawford with Leonard on Nov 17, 2008 at the Centenial Meet held at Bucklodge Haven. Photo by C.M. Lenkin

In 1951, Leonard married Sue Lee and she thought it might be a good idea if he had a steady gig, rather than a series of part-time jobs. Thus he walked into Mitch & Bill’s auto repair shop in Potomac Village and there he stayed until he retired 44 years later (of course, as he still goes to Mitch & Bill’s, it’s hard to tell if he ever really retired). In so doing he transitioned from taking care of Potomac’s horses and their riders, to taking care of Potomac’s cars (and their owners)—while still taking care of their horses!

In 1953, Leonard started riding horses at Ardnave Farm for Mr. and Mrs. Ernest (Peg) Smith, working for “Mrs. Smith” until she died. An avid foxhunter and show rider, Peg Smith and Leonard were constantly on the road or in the saddle, hunting with different packs and traveling the hunter show circuit. “It was different in those days,” explains Leonard. “They would hunt today,” he said, referring to the horses, ”and show ‘em tomorrow.” It is hard for today’s show hunter riders to believe that the original of the “show hunter” was the field hunter who showed!

Over the years, Leonard worked with some of the best of the best in the horse world. “Miss Bella,” recalls Leonard, referring to Bella Hagner Martin, who had Whitestone Farm on River Road in the 1950s, “now she was a helluva horsewoman, mmm-hmmm. And Happy Christmas. And Charlie Carrico! A helluva horseman. I worked for him for a little while, showing conformation horses.”

The Smith children did not hunt, so when their mother Peg passed away, the family bestowed upon Leonard all of their parents’ hunting memorabilia, including ribbons and silver trophies, some of which Leonard has lovingly displayed throughout his home (along with the plethora of foxes that all foxhunters seem to be given as gifts!).

Sixty-five years in the hunt field begs the question: did he ever get injured? Certainly a statistical anomaly, Leonard had only one injury that needed tending: when his horse stepped into a hole, Leonard fell and developed a hematoma that needed to be drained.

You are throwing a party for several hundred people. Every detail has been planned out. Nothing has been overlooked. But until Leonard and Johnny arrive, you are not calm. Something could go wrong. But once they arrive, then you can relax. If anything goes wrong, they will fix it. Leonard with Lyne Morgan who owned The Surrey in Potomac

For 50 years no one planned a party in Potomac without first clearing the date with Johnny and Leonard. Once they approved your date, then you could begin planning the party. And once you gave them your guest list, they would take care of the rest of the planning, as they knew exactly who drank what, and purchased accordingly.

Soon Leonard migrated from behind the bar to the dance floor, eventually entering regional dance contests, once taking first place for the merengue and second place for the foxtrot! Without a doubt, he is the best dancer at any hunt ball. And that is a fact, not an opinion, to which your publisher can attest, as she is one of many ladies vying for a spot on Leonard’s always-full dance card at any ball!

Births and deaths. Marriages and divorces. Crises big and small, Leonard has been there through them all.

After retired Potomac MFH William Carroll died, Leonard became the driver for Lyn Carroll (always “Mrs. Carroll” of The Surrey) and escorted her to race meets and social functions.

“After my Bill died,” explained Sara Lee Greenhalgh, “Leonard was just so kind; I don’t know what I would have done without him,” referring to the death of her husband in 1994.

Likewise Sylvia Biggar. Both she and her sister Trisha leaned heavily on Leonard and Sue Lee after Trisha’s husband’s untimely death. When Trisha’s son was killed a year later in a freak accident (he was working under a car that slipped off its blocks), again the family leaned on Leonard and Sue Lee. Soon, the circle of ladies around Sylvia were having lunch regularly for moral support, nicknaming themselves the “Old Potomac” Lunch Bunch. When Trisha was diagnosed with cancer, lunches ramped up to weekly get-togethers at Trisha’s home, with Leonard in the middle, recalling childhood stories about Trisha, Sylvia and their third sister Happy, and their father, the indomitable, colorful Master of the Potomac Hounds, Sam Bogley. “We just laughed and laughed and laughed,” recalls Vicki Crawford about those lunches with Leonard at Trisha’s house.

After Johnny Jackson died, Vicki said, Leonard just seemed adrift, as he had been so close to his uncle, and then after Sue Lee died, the ladies made him a permanent addition to The Ladies’ Lunch Bunch! “That was it,” said Vicki, “he was just permanently one of the girls after that.” Many thanks to “The Lunch Bunch” for allowing The Equiery to experience lunch with Leonard and his ladies, and for helping with this article. – C.B.K.

It was 1995. Most of the people for whom Leonard had ridden horses had passed away. With fewer horses to make in the hunt field, he had fewer opportunities to hunt. Leonard had been hunting the Crawfords’ older hunters until one day he inquired about membership in PHC. Explains Vicki: “The Hunt Committee considered his membership application—and rejected it. Everyone voted to make him an Honorary Member, a unanimous decision!”
Leonard was promptly awarded his colors, and Mrs. Carroll quickly outfitted him with hunting pinks and scarlet tails for evening. From party bartender to party guest, from groom to honorary, Leonard’s transition was complete. He was—and is—a Potomac institution.

“Take care of your family, your cars, your horses, your house and life is just good.”

It is a simple life philosophy that has stood the test of time for Leonard.

In Leonard’s garage is a 1972 Ford Mercury that he purchased in 1978 from MFH William Carroll. “I know everything about this car,” explained Leonard, “because I am the one that took care of it when Mr. Carroll bought it new.” Mr. Carroll’s office was just across the street from Mitch & Bill’s and just a few doors away from Mrs. Carroll’s tack store. Mrs. Carroll was quoted in the Almanac in 1987: “Anything you ask him to do, he is right there into it, doing it, very promptly and very well.”

And that has been Leonard’s philosophy. He took care of his people. He made their horses. He maintained their cars. He absorbed their cares, and in return people care about Leonard. Five years ago, 22 members of the club expressed their appreciation to Leonard by buying him a new foxhunter, a chestnut horse named Blue.

Today you will find Leonard, impeccably tailored and turned out as always, hunting Blue first flight; 2012 marks Leonard’s 65th season following the Potomac Hounds. If he is not in the hunt field, you will find him (still nattily attired) hanging with the boys at Mitch & Bill’s or holding court in the Hunter’s Inn, always with a smile, always with a kind word. How does he do it? “I just enjoy people,” explained Leonard, in his quiet manner. “You got to enjoy life. Life is too short. I believe in enjoying every day.”